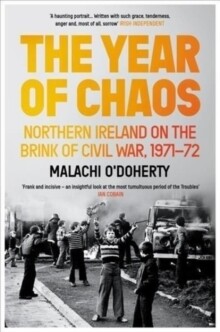 Year of Chaos, The

In the eleven months between August 1971 and July 1972, Northern Ireland experienced its worst year of violence. No future year of the Troubles experienced such death and destruction.

The 'year of chaos' began with the introduction of internment of IRA suspects without trial, which created huge disaffection in the Catholic communities and provoked an escalation of violence. This led to the British government taking full control of Northern Ireland and negotiating directly with the IRA leadership. Operation Motorman, the invasion of barricaded no-go areas in Belfast and Derry, then dampened down the violence a year later.

During this whole period, Malachi O'Doherty was a young reporter in Belfast, working in the city and returning home at night to a no-go area behind the barricades where the streets were patrolled by armed IRA men. Drawing on interviews, personal recollections and archival research, O'Doherty takes readers on a journey through the events of that terrible year - from the devastation of Bloody Sunday and Bloody Friday to the talks between leaders that failed to break the deadlock - which, he argues, should serve as a stark reminder of how political and military miscalculation can lead a country to the brink of civil war.