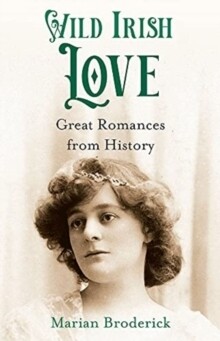 Tales of passion and romance, love on the battlefield, affairs kept secret on pain of death ... From the bride who married in a prison cell, to the leader caught in a love triangle, to the revolutionaries who did their loving on the run, the romantic lives of Ireland's most famous characters have been predictably turbulent. Some Irish lovers have shocked a nation and brought down governments, some have produced the world's most beautiful poetry, some have reached across oceans - not to mention deep divisions at home - to find love.

Marian Broderick views historical Irish romances through a contemporary lens, from the legendary lovers of prehistory to more modern convention-defying pioneers. The greatest Irish romances from history. With chapters on Inspirations, Love & War, Love Across the Divide, Secrets & Scandals and When Love Goes Wrong, among others, Marian Broderick tells of the men and women whose passions drove them to be together: often in the face of society, family, and even their own safety.

From the legendary Deirdre and Naoise to WB Yeats and Maud Gonne, Charles Stuart Parnell and Katherine O'Shea to Hilton Edwards and Micheal MacLiammoir, romantic Ireland is far from dead and gone!