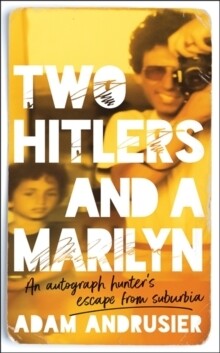 Two Hitlers and a Marilyn

"I'd managed to puncture a hole between our universe and the parallel one where all the celebrities lived."

Adam Andrusier spent his childhood in pursuit of autographs.

After writing to every famous person he could think of, from Frank Sinatra to Colonel Gaddafi, he soon jostled with the paparazzi at stage doors and came face-to-face with the most famous people on the planet.

For young Adam, autographs were a backstage pass to a world beyond his chaotic family home in Pinner, and his Holocaust-obsessed father. They provided a special connection to a world of glamour and significance lying just beyond his reach.

But as Adam turned from collector to dealer, learning how to spot a fake from the real deal, he discovered that in life, as in autographs, not everything is as it first appears. When your obsession is a search for the authentic, what happens when you discover fraudulence in your own family?

Two Hitlers and a Marilyn is a hilarious and moving account of discovering that idols are mortals. It's a story of growing up, forgiveness and discovering a place in the world.