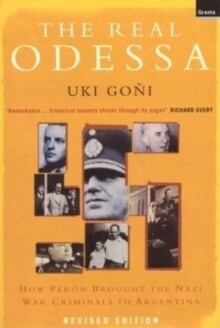 A groundbreaking work of investigative journalism revealing the complicity of the Vatican and the Swiss government in aiding Nazi war criminals' escape from Europe to Argentina - reissued with a new preface by Philippe Sands and additional material. As Russian forces closed in on Berlin, and Hitler's premiership drew to a close, many Nazi officials fled Germany. In this startling, meticulously researched account, acclaimed journalist Uki Goni unravels the complex network that led them to Argentina.

Relying on international support - in Scandinavia, Switzerland and Italy - and the enthusiasm of the Vatican and President Juan Peron, Goni shows how this 'ratline' allowed Adolf Eichmann - the architect of the 'Final Solution' - Josef Mengele, Erich Priebke, and many more, into the country. Both riveting and rigorous, this remarkable investigation sheds vital light on both a disquieting episode in Europe's history, and the ties between Argentinian Catholic Nationalism and Fascist movements in Euro
Save this product for later
Display prices in: EUR
This site uses cookies to offer you a better browsing experience. By browsing this website, you agree to our use of cookies.
Accept