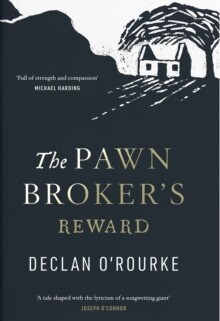 Declan O'Rourke's award-winning album, Chronicles of the Great Irish Famine, was released to critical acclaim in 2017. It illuminated an extraordinary series of eye-witness accounts, including the story of Padraig and Cait ua Buachalla. Four years on, in Declan's meticulously researched literary debut, the story of the ua Buachalla family is woven into a powerful, multilayered work showing us the famine as it happened through the lens of a single town - Macroom, Co. Cork - and its environs. Local pawnbroker Cornelius Creed is at the juncture between the classes. Sensitive and empathetic, he is a voice on behalf of the poor, and his story is entwined with that of Padraig ua Buachalla.

Through these characters - utilising local history and documentary evidence - Declan creates a kaleidoscopic view of this defining moment in Ireland's history.