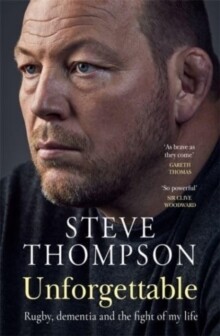 When rugby union turned professional, Steve was plunged into a game where raw power meant everything. Today, he remembers nothing about playing in that final. In his words, watching the tape back is like watching a ghost.

The years of hurt in an era of professional meat shields, and the culture of sucking up punishment and coming back for more, have taken a terrible toll. Steve has been diagnosed with early onset dementia, and probable chronic traumatic encephalopathy. He is in his early forties.

There are days when he doesn't remember the names of his wife and four kids. Unforgettable is part sports memoir - with stories contributed by his world-cup winning teammates and his former manager, Sir Clive Woodward - and part raw human storytelling. In it, Steve will make memories for himself and for his children, and will relive the biggest battle of his life, with his toughest opponent - his own mind.

Despite the constant reminders of what has been lost, and what is still to lose, Steve's powerful story is one of hope and courage. Unforgettable stands as testament to the ultimate strength of the human mind - and to a man no longer pushing himself to the limit for competition, but for his own place in the world.