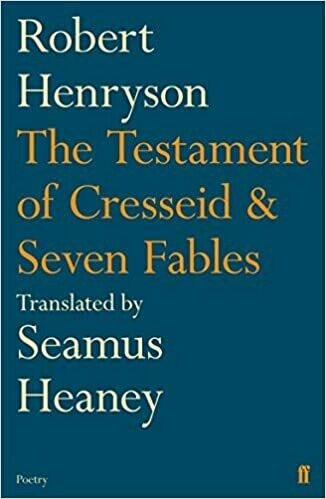 Testament of Cresseid and Seven Fables

The greatest of the late medieval Scottish makars, Robert

Henryson wrote in Lowland Scots, a distinctive northern version of

English. He was profoundly influenced by Chaucer's vision of the frailty

and pathos of human life. His greatest poem, and one of the rhetorical

masterpieces of the literature of these islands, is the narrative Testament of Cresseid, set in the aftermath of the Trojan War, which completes the story of Chaucer's Troilus and Criseyde,

offering a grim and tragic account of its faithless heroine's rejection

by her lover Diomede, and her decline into prostitution and leprosy.

A work of unreconciled Shakespearean intensity, the Testament has been translated by Seamus Heaney into a confident and yet faithful modern English idiom which honours the poem's unique blend of detachment and compassion. A master of narrative, Henryson was also a comic master of the verse fable; his burlesques of human weakness in the guise of animal wisdom are traced with delicate comedy and irony. Seven of the Fables are here sparklingly translated; their burlesque freshness rendered to the last claw and feather. Seven Fables and The Testament of Cresseid is an extraordinarily rich and wide-ranging encounter between two poets across six centuries.