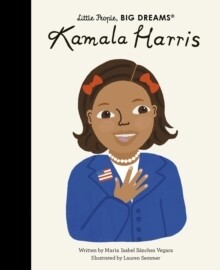 In this book from the highly acclaimed Little People, BIG DREAMS series, discover the incredible life of Kamala Harris, the first woman, first Black person, and first South Asian American to be elected vice president of the USA. Little Kamala used to accompany her parents to civil rights marches in California, strapped into her pushchair so she wouldn't get lost. From an early age, she dreamed of becoming a lawyer to help people in need.

At university, Kamala felt like she could do anything and everything. She earned a law degree to make sure the most vulnerable were protected by justice. Kamala's life was full of firsts, including becoming the first woman, Black woman, and South Asian American to be elected vice president.

As Kamala stated to little girls everywhere in her speech - she may be the first but she won't be the last. This powerful book features stylish and quirky illustrations and extra facts at the back, including a biographical timeline with historical photos and a detailed profile of the politician's life. Little People, BIG DREAMS is a bestselling series of books and educational games that explore the lives of outstanding people, from designers and artists to scientists and activists.