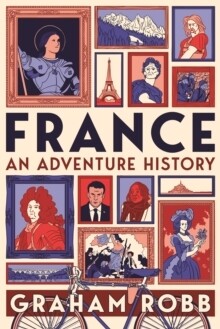 This is a profoundly original and entertaining history of France, from the first century BC to the present day, based on countless new discoveries and thirty years of exploring France on foot, by bicycle and in the library.

Beginning with the Roman army's first recorded encounter with the Gauls and ending with the gilet jaunes protests in the era of Emmanuel Macron, each chapter is an adventure in its own right. Along the way, readers will find the usual faces, events and themes of French history Louis XIV, the French Revolution, the French Resistance, the Tour de France but all presented in a shining new light.

Graham Robb's France: An Adventure History does not offer a standard dry list of facts and dates, but a panorama of France, teeming with characters, full of stories, journeys and coincidences, giving readers a thrilling sense of discovery and enlightenment. It is a vivid, living history of one of the worlds most fascinating nations by a ceaselessly entertaining writer in complete command of subject and style.