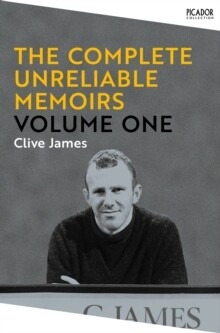 I was born in 1939. The other big event of that year was the outbreak of the Second World War, but for the moment, that did not affect me.'

Collected here in this brand new edition are the first three volumes of Clive James's million-copy selling autobiographical series: Unreliable Memoirs, Falling Towards England, and May Week Was In June.

In typically hilarious and self-effacing style, James proves a hugely entertaining and erudite guide to his own remarkable life, with these volumes detailing James's childhood adventures in the suburbs of post-war Sydney, his excited arrival in London as a young man and aspiring poet, and the life at Cambridge University that led to him falling in love (often) and getting married (once).

The Complete Unreliable Memoirs: Volume One is an introduction to one the most beloved and acclaimed series of memoirs of all time, from a true national treasure.

Other Clive James books available as part of the Picador Collection include The Complete Unreliable Memoirs:Volume Two and Cultural Amnesia.