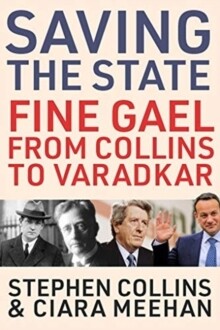 Saving the State - Fine Gael from Collins to Varadkar

When Fine Gael entered a coalition government with Fianna Fail in 2020 the party did what would have been unthinkable for its forefathers who fought and won a bitter civil war to establish the institutions of an independent Irish state almost a century earlier. Told through the lens of its leaders and Taoisigh, Saving the State is the fascinating story of the wilderness years and the achievements in government, the defeats and crises, the partnerships and the leadership upheavals that have shaped Fine Gael over the decades. From the special place in the party's pantheon of heroes occupied by Michael Collins to the dark era of the Blueshirts, and from its role as the founders of the state to its claim to be the defenders of the state, the ways that members perceive their own history is also explored.

This book is essential reading for anyone interested in understanding how Fine Gael came to be the party it is today and the role that it played in shaping modern Ireland.