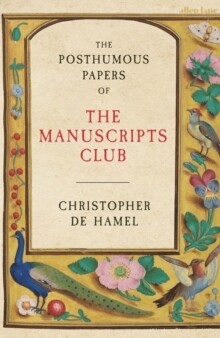 Posthumous Papers Of The Manuscript Club, The

The acclaimed author of Meetings with Remarkable Manuscripts introduces us to the extraordinary keepers and companions of medieval manuscripts over a thousand years of history The illuminated manuscripts of the Middle Ages are among the greatest works of European art and literature.

We are dazzled by them and recognize their crucial role in the transmission of knowledge. But we generally think much less about the countless men and women who made, collected and preserved them through the centuries, and to whom they owe their existence.

This entrancing book describes some of the extraordinary people who have spent their lives among illuminated manuscripts over the last thousand years. A monk in Normandy, a prince of France, a Florentine bookseller, an English antiquary, a rabbi from central Europe, a French priest, a Keeper at the British Museum, a Greek forger, a German polymath, a British connoisseur and the woman who created the most spectacular library in America - all of them were participants in what Christopher de Hamel calls the Manuscripts Club. This exhilarating fraternity, and the fellow enthusiasts who come with it, throw new light on how manuscripts have survived and been used by very different kinds of people in many different circumstances.

Christopher de Hamel's unexpected connections and discoveries reveal a passion which crosses the boundaries of time. We understand the manuscripts themselves better by knowing who their keepers and companions have been. In 1850 (or thereabouts) John Ruskin bought his first manuscript 'at a bookseller's in a back alley'. This was his reaction: 'The new worlds which every leaf of this book opened to me, and the joy I had in counting their letters and unravelling their arabesques as if they had all been of beaten gold - as many of them were - cannot be told.' The members of de Hamel's club share many such wonders, which he brings to us with scholarship, style, and a lifetime's experience.