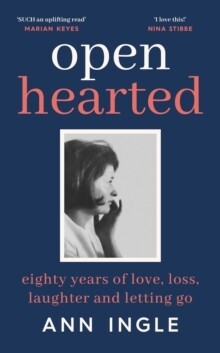 'Something they don't tell you about getting older is that you fall. Oh, you hear about it in passing, of course, "She had a fall, poor thing". Falling is not something you ever think about as a younger woman. You think about falling in love . . .'

At 20 Londoner Ann Ingle fell madly in love with an Irish fellow she met on holiday in Cornwall.

At the church to arrange their shotgun wedding she discovered that he hadn't even told her his real name. Sixty-odd years later Ann looks back on that first glorious fall and in a series of essays considers what she has learned from the life that followed - bringing eight children into the world, their father's years of mental illness and tragic death at 40, being a cash-strapped single mother in 1980s Dublin, coming into her own in her middle years - going to college, working and writing, and continuing to evolve and learn into her ninth decade, even as she accepts the realities of being 'old'. Candid about everything that matters - love, sex, heartbreak, money, class, religion, mental health, rearing children (and letting them go), reading and writing, ageing - Openhearted is a compelling story about living life in a spirit of curiosity and delight and with a willingness to look for good in others.