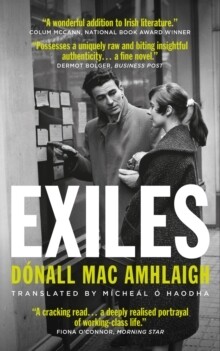 Two Irish migrants on the cusp of new lives in post-war Britain. Two young people who dare to dream of a better life, and dance the music of survival in their adopted homeland. Afraid that his wife and children will arrive over any day, Trevor is in a hurry to settle old scores with his rivals and to prove himself the top fighting man within his London-Irish community of drinkers and navvies while Nano seeks to escape the stifling conformity and petty jealousies of her peers and forget her failed love-match at home.

Will Trevor finally prove himself "the man" and secure the respect that he feels is his by virtue of blood and tribe? Does Nano have it in her to break free of the suffocating bonds of home and community and find love with Lithuanian beau Julius? Written at a time when the Irish were "building England up and tearing it down again," and teeming with the raucous energy of post-war Kilburn, Cricklewood and Camden Town this novel is one of the very few authentic portrayals of working-class life in modern Irish literature. Up to one in four UK citizens claims Irish heritage. For each decade of the 1950s alone - a time of British postwar boom and Irish economic decline - over half of Ireland's population, those coming of age in that decade, emigrated: the majority to England.

And while Irish-owned companies today account for one tenth of the almost GBP100bn British construction industry, those navvies who built our homes, roads and hotels comprise a forgotten generation, alongside the nurses that made the crossing alone to power our nascent Welfare State.

Donall Mac Amhlaigh was among them, working on construction sites throughout London and the Midlands, including the M1 and M6motorways. In this autobiographical novel are the people who later calcified into stereotypes of Irish immigrants and their haunts: the navvy, the drinker, the fighter, the nurse.

As with the Polish builder,Romanian gangster or Spanish nurse of today, such caricatures have their source in real lives adapting to economic reality.