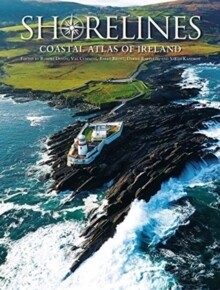 Coastal Atlas of Ireland, The

The Coastal Atlas of Ireland is a celebration of Ireland's coastal and marine spaces. Drawing on written contributions from over 100 authors from across the island of Ireland and beyond, the Atlas takes an explicitly all-island approach; though the work has a much wider relevance and potential reader interest. It is organised into six sections, comprising a total of 33 chapters, that take the reader from the distant geological past, by way of the prehistoric era and a focus on the island's physical environments, through time and the human colonisation of Ireland, to the complex cultural and economic landscapes of the near past and the present day.

It concludes with an assessment of the importance of coastal and marine environments in understanding the island's past, appreciating the present, and contemplating future opportunities and challenges. Although not claiming to be encyclopaedic, when read in its entirety the Atlas will provide readers with a fascinating and comprehensive excursion through time and space along Ireland's coastline. The Atlas is equally suited to being read in progression or, if preferred, can be dipped into and navigated according to the specific interests of the reader.

Within each chapter, in addition to the core text, a series of featured subjects and case studies provide greater-depth explorations of particular topics or examples related to the central theme. In addition, the maps, photos and other illustrations that accompany the text have been provided with self-contained captions that may also be browsed before a more immersive reading is undertaken. Ireland has often emerged as a global leader in its many engagements with the sea, including in marine and coastal science, the pursuit of a 'blue' (and green) economy, the championing of conservation goals, and in the development of sustainable marine renewable-energy resources.

In the middle of the current "UN Decade for Ocean Science"(UNESCO), the Atlas celebrates these achievements, while pointing the way for future research and explorations that build on these foundations. The complex of physical and human themes developed in this Atlas has international relevance for coastal communities worldwide, and especially those located in mid-latitudes. Nowhere else in the world has such an all-embracing and multifaceted exploration of a nation's, or an island's, coast been undertaken.