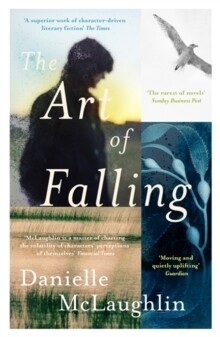 Art Of Falling, The

SKU S4VWWSK1CAAHP
€10.99
In stock
1
Product Details
Clover Product ID: S4VWWSK1CAAHP
ISBN: 9781473613690
Author: McLaughlin, Danielle
Format: Paperback
At the former home of the sculptor Robert Locke, Nessa, a gallery employee, is struggling to manage Eleanor and Loretta Locke, the sculptor's widow and middle-aged daughter. Meanwhile, her marriage is floundering in the aftermath of her husband's affair, and she's becoming increasingly alienated from her teenage daughter. At this worst possible time, her past resurfaces in the form of Caroline Ferriter, a woman she once shared a flat with in London.

Caroline is in contact with the son of their long-dead flatmate, Amy, who killed herself at the age of 24. Luke, Amy's son, is coming to Ireland in an attempt to understand something of the person his mother was. At the last minute, Paul, Luke's father, whom Nessa was once briefly involved with, invites himself along too.Things become only more complicated once the two men arrive in Ireland and when an American woman, Melanie, comes forward to claim that she, and not Eleanor, was Locke's muse for his best known piece, the Chalk Sculpture, things really start to spiral out of control.
Save this product for later
Display prices in: EUR
This site uses cookies to offer you a better browsing experience. By browsing this website, you agree to our use of cookies.
Accept