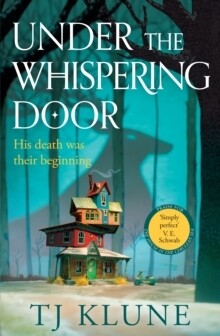 Under The Whispering Door

Witty, haunting, and kind, Under the Whispering Doors a gift for troubled times. TJ Klune brings us a warm hug of a story about a man who spent his life at the office - and his afterlife building a home.From the author of joyous New York Times bestseller The House in the Cerulean Sea

Welcome to Charon's Crossing. The tea is hot, the scones are fresh and the dead are just passing through. When a reaper comes to collect Wallace from his own sparsely-attended funeral, Wallace is outraged. But he begins to suspect shes right, and he is in fact dead.

Then when Hugo, owner of a most peculiar tea shop, promises to help him cross over, Wallace reluctantly accepts the truth.

Yet even in death, he refuses to abandon his life even though Wallace spent all of it working, correcting colleagues and hectoring employees. He'd had no time for frivolities like fun and friends. But as Wallace drinks tea with Hugo and talks to his customers, he wonders if he was missing something.

The feeling grows as he shares jokes with the resident ghost, manifests embarrassing footwear and notices the stars. So when hes given one week to pass through the door to the other side, Wallace sets about living a lifetime in just seven days.

Fans of A Man Called Ove and The Good Place will fall for this queer love story by TJ Klune.