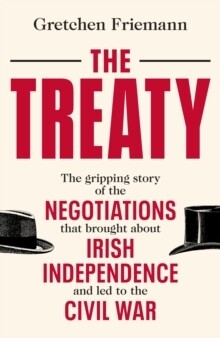 On the morning of 11 October 1921, the world's media watched as the most wanted man in Ireland bounded through the door of 10 Downing Street. Moments later, the 'head of the murder gang' grasped the hands of the Prime Minister. Such was the mind-bending melodrama of the events leading up to what is known in Ireland, very simply, as 'the Treaty' - a document that had been designed to end one violent conflict and soon gave rise to another.

A century on from its signing, Gretchen Friemann has produced a gripping and definitive account of the negotiations, shining a fresh light on the complex politics and high-stakes bargaining that produced the agreement. The Treaty is a stunningly vivid piece of narrative history that resonates across the intervening century to the age of Brexit. It is a must-read for anyone who wishes to understand modern Ireland and the enduring complexities of British-Irish relations.