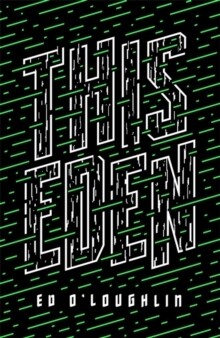 This Eden is a smart modern spy novel reminiscent the cybercrime novels of William Gibson as well as the golden age of panoramic international espionage fiction. Alice and Michael meet at university in Vancouver, she is a young computer prodigy, he is the hapless orphaned son of Iranian immigrants. First love is followed by a rift and then Alice disappears - suicide is suspected.

While still processing the trauma, Michael is recruited by a San Francisco tech firm to work for its sinister founder Campbell Fess. But on arrival he finds himself at the centre of brilliantly managed con by a reluctant female spy named Aoife, who leads him to her handler, the ragged Towse. Powerless to the turn of Towse's whims, they're coerced into beginning a journey which neither of them understands, always having to keep ahead of Fess, his operatives and main hitwoman, Barb Collins.

Their journey will take them by air and by sea, from California to Manhattan, into the Ugandan rain forest, Jordan, Jerusalem, Paris and finally Dublin. Under surveillance by the shape-shifting government war gamer, Towse, until the revelation of just what Fess is about to achieve is unveiled. Fast-moving, exhilarating and tense, This Eden plunges into an urgent struggle to disarm the deadliest weapon ever invented.

O'Loughlin crafts the spy novel into a sharp and engrossing narrative of a world overrun by cyber-warfare, moral bankruptcy and the assassination of identity.