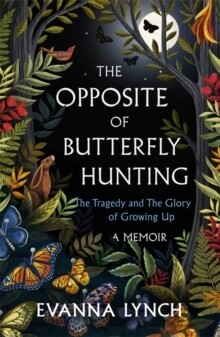 Opposite Of Butterfly Hunting

'Gradually, I began to feel this dawning awareness that womanhood wascoming for me, that it was looming inevitably, and it didn't feel safe... While those around me tried to expedite it, simulate it, exacerbate it, I tried to strangle it.'A raw and compelling new memoir from actress and activist Evanna Lynch about the battle between perfection and creativity. Evanna Lynch has long been viewed as a role model for people recovering from anorexia and the story of her casting as Luna Lovegood in the Harry Potter films has reached almost mythic proportions.

Yet even after recovery, there remains a conflict at the very core of her being: a bitter struggle between the familiar, anesthetising pursuit of perfection, and the desire to fully and fearlessly embrace her creativity. In her memoir, Evanna confronts all the complexities and contradictions within herself and reveals how she overcame a life-threatening eating disorder, began to conquer her self-hate and confronted her fear of leaving the neatness and safety of girlhood for the unpredictable journey of being a woman. Revealing a startlingly accomplished voice, Evanna uses her book to delve into the very heart of a woman's relationship with her own body.

Unwilling to let the darkness of her eating disorder eclipse her dreams, but afraid to fully release the certainty and safety of self-destruction, Evanna explores the pivotal moments and choices in her life that led her down the path of creativity and dreaming and away from the empty pursuit of perfection, and reaches towards acceptance of the wild, sensual and unpredictable reality of womanhood. This is a story of the tragedy and the glory of growing up, of mourning girlhood and stepping into the unknown, and how that act of courage is the most creatively liberating thing a woman can do.